We made it to Newcastle around lunch time and as soon as Fella had a bearing of where we were, he decided the first place to see was his old flat. It was a normal looking end unit apartment on the corner of 2 fairly quiet streets. For purely cognitive purposes, I snapped a quick picture (that’s not weird, right?), and we went on our way. We made it to Newcastle city center where once again we were presented with the frustrating question of: Where are we going to park? After driving around multiple car parks with no vacancies and making about a half a dozen 18-point turns to escape the close quarters of said non-vacant car parks, we found an end spot on the side of the street. Perfect! We slid right in and went to pay for the parking stub, come to find out it was 1 hour parking only.

Newcastle in one hour; can it be done?

The answer is yes and no. Yes because I got to experience Newcastle, and no because there was so much of Newcastle that I didn’t get to see. Fella took me to one of the university buildings he spent many hours working on his degrees, then across campus, and wound up walking around in a rather busy outdoor mall area. There was live music echoing down the store fronts of T.K. Maxx, H&M, Boots, and the like, and of course, lots of clocks!

Once we made it to the far side of the town center, we had 15 minutes left on our parking pass, so we made our way back towards the car. Though it was all a blur, I enjoyed Newcastle (what little I saw of it), and wouldn’t mind going back to explore some more.

Back at the car, it was my turn to drive, so Fella was in charge of directions. He had a destination in mind that he thought I would like, so we made our way east; to Tynemouth.

Given what little time we had in this area of the country, I’m so glad that we spent most of it in Tynemouth. It was unlike any town I’ve ever seen! It was quaint. It was pleasant. It was cute. It was the quintessential small English town, and I’m beyond grateful I was able to visit, if only for a few hours.

Positioned on the coast of the North Sea, Tynemouth is home to the Tynemouth Castle and Priory which dates back to the seventh century! How’s that for old!? While the castle itself is the focal point of the town, the main thoroughfare is lined with little specialty shops and eateries while the North Sea makes its presence known as the city’s backdrop.

We secured a parking spot for a few hours (which was probably the easiest parking attempt of the entire trip), and headed for the castle. I was enraptured by the charm this town had to offer, and being from America (where we don’t have castles), I turned into a child, pointing at every little thing, ooing and ahhing. 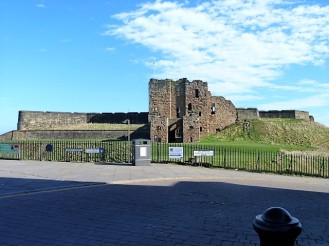 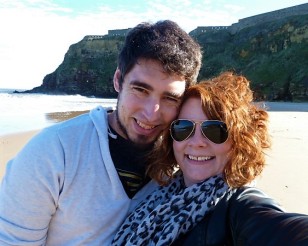 We made our way down to the beach area where we both took turns touching the North Sea (don’t judge). There were only a handful of other beach goers and half of them were doggos! They didn’t seem to be bothered by how cold the water was. They would bound straight into the waves then turn right around and run back to their owners as if to say, “Did ya’ see me? Did ya’ see me?” We even had one come up to us and say hello before tearing after his buddy. I could have easily spent the entire day there watching the pups enjoy the surf.

It was meant to be!

We made our way back up to the main strip and decided it was time for lunch. Lo and behold, we found a fish & chips spot with my sur name: Marshall’s! What a perfect place to eat my first ever authentic fish & chips!?

Was my first fish & chips everything I wanted and more? Well… I loved the fresh cod plank, but I’m not a fan of what we Americans call ‘thick cut fries.’ But over all, yes, it was delicious.

While Fella was paying, a local commented on my accent (first time during the trip). We got to talkin’ a bit about where I’m from and it turned out that Fella and I live not too far from his brother. Small world, huh? He said that we came at the perfect time of year; that we were experiencing their one day of summer and to enjoy it while it lasted. I think we used the great weather to our advantage. 🙂

After lunch, we hit the road again. It was back to York to meet Fella’s mom for the first time ever.

I was excited; I was anxious; I was nervous; I was worried… all because my phone wasn’t keeping a charge and it was our only means of finding our way (plus meeting the mom thing…). Neither one of us are sure what happened as anytime we were in the car, we had it plugged in, but our reality was: we had to find a restaurant in a strange city with 5% battery left. Challenge accepted! We found a car park (the first one we spotted in York) and took off on foot. With 4% battery, the phone led us down an alleyway and across a bridge. 3%, it led us up a rather trendy street with boutiques and fashion outlets lining either side.  2%, we found the street the restaurant was located on and then it died.

Okay. We can do this.

It was 5 minutes past the time we were supposed to meet up and as Fella and I were both screening the store fronts to our left trying to find one that resembled an Indian restaurant, we heard the friendliest of hellos come from the other side of the street. There they were: huddled together under an awning with smiles stretching across their faces.

Fella’s mom immediately wrapped herself around Fella. It was a sweet exchange between mother and son that would make anyone’s heart melt. Then it was my turn. After a swift, “Its so nice to finally meet you,” I too, wound up in the grips of my possible mother-in-law-to-be. I then said a sweet hello to Fella’s 8 year old half sister who was obviously shy, not wanting to make eye contact, but acknowledging me with a quick response. Then shook hands with Fella’s mom’s husband. As we all turned to make our way to the restaurant, I found myself bringing up the rear, admiring them as a group and realizing that it finally happened: I had met Fella’s family.

It’s almost indescribable the feeling of acceptance I felt from Fella’s family. Never in my life have I met a group of people so kind and warm. They spoke to me as if we had been in each others’ lives all along; like I wasn’t just the new girl in Fella’s life. I was instantly accepted as one of their own. I didn’t have to explain myself. I didn’t have to prove myself. There was no awkward phase typical of most first social encounters (at least those that I’m involved in). It was effortless.

When it came time to leave, I didn’t want to say goodbye. I felt cheated in a way. I had just met these amazing people, and it was already time to part ways. We did so somewhere in the middle of York around 8pm, which meant it was dark, and if you recall, my phone was dead, so we had no way of knowing where we were or where the car was. Luckily, I have an innate sense of direction, so I was able to find the car in no time. Go me! 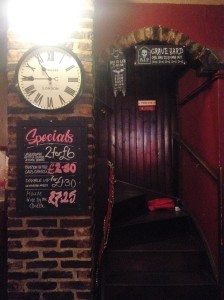 We made our way back to the cottage, parked (in the insane alleyway yet again), and headed out to the pub. This time, we ended up at The Spread Eagle. A handful of locals were scattered around by the time we got in, making for a very comfortable atmosphere. After we got our drinks, we made our way to the back and settled into the corner. As music from my teenage years played above, Fella and I nursed our brews and recounted the day’s happenings and looked through our pictures. What a perfect way to end an amazing day.

Next stop on the itinerary: Manchester.

14 thoughts on “More Clocks, A Beach, & Meeting The Family”