I’m a planner. I like to have a set itinerary. I like to have an idea of where and when I’m supposed to be somewhere, especially on a trip away from home. But you know what? I’m starting to get over that idiosyncrasy. Not that I don’t believe in the power of a well thought out plan. Its just… I hate when things don’t go accordingly. I tend to work myself up expecting a certain outcome, and when it doesn’t happen, even if I have no control over the situation, I become upset. Not in a distraught fashion; it’s more of a depressive state. As a result, my mentality has shifted. Why set myself up for the possibility of being let down? I have taken on more of a ‘go with the flow’ disposition.

And it’s a good thing too…

We woke up Thursday morning with a little more excitement for our day. Throughout our entire trip, there were 2 things that we had booked in advance: the dinner cruise down the Seine in Paris and tickets to the Bat Out of Hell musical in Manchester. Fella is a BIG Meatloaf fan; he even has a tattoo of the Bat Out of Hell album cover. BIG FAN! So when Rhiannon hinted at the musical on her blog, I knew that we had to go. 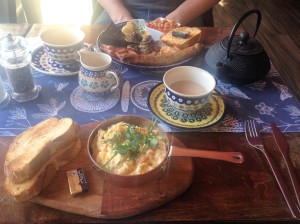 We started the day off at a Polish restaurant for breakfast that was recommended to us by Fella’s family. It was a sweet little cafe situated across the street from a charming little church. We were seated next to the window overlooking the sleepy street, affording us the pleasure of people watching as we waited for our food. Fella got the Polish version of the full English breakfast, and I got scrambled eggs with salmon and sourdough. Talk about starting the day out right! After breakfast, we made our way to the city of Manchester.

What to say about Manchester… It was dingy. It was dirty. There was construction work everywhere we turned. Out of the stops we had made thus far, Manchester was the least bit thrilling. The only reason it was a spot on our radar was for the musical, and rightfully so.

We made our way towards the theater after parking in a parking deck built for ants (…anyone?). We noticed from down the block that there was already a line forming out onto the sidewalk, so we decided to kill some time at the Starbucks across the street. We finished our teas and headed for the theater. Upon arrival, we were greeted by an usher stating that the matinee show “had been cancelled due to technical difficulties,” and that they were offering refunds and vouchers for another show. What the what!? Cancelled because of ‘technical difficulties?’ Did they try turning it off and turning it back on again!?

The usher gave us 2 options: go to their website and take care of everything ourselves or wait in line and talk to the people at the ticket booth. Since there was another show scheduled for later that evening, we decided to stay in line and see if we could coax them into letting us go to that one seeing as we were visiting from out of the country and all… Luckily, they were very understanding and they did in fact have a few seats available for the evening show. They refunded our original tickets and gave us vouchers for the evening show on the house. Yay! Free show!

As we made our way back to the car, the question then became: What are we going to do for 5 hours? I still hadn’t stepped foot in a castle (as the one in Tynemouth was closed off), so it became my quest; go explore a castle. We Googled castles in the area and found the closest one to be about 10 miles away. Well, the ruins of one anyway… good enough for me! Now, where I’m from, a 10 mile journey lasts anywhere from 15-25 minutes depending on traffic. Not in Manchester! It took us close to 2 hours to get to our final destination! Granted, we had to suffer through multiple construction zones and a half a dozen schools letting out along the way. I was driving this stint of the journey and I wasn’t having any fun. I even managed to drive through a bus station. Oops!

We finally made it out to the rural area and found ourselves on a one lane gravel road heading up the side of an enormous hill; a baby mountain if you will. Fella and I both had the feeling that we were not welcome on whatever property laid ahead, but we were foreigners and would use that excuse accordingly if needed (I would have to do the talking obviously, as his accent would have caused some confusion). The road leveled out near the top and we found a small area to pull off and park before heading into what looked to be a quarry.

Ummm… where is this supposed ‘castle in ruin?’

To this day, neither Fella nor I believe there was ever a castle located atop of this hill, but we sure were happy with our final destination: 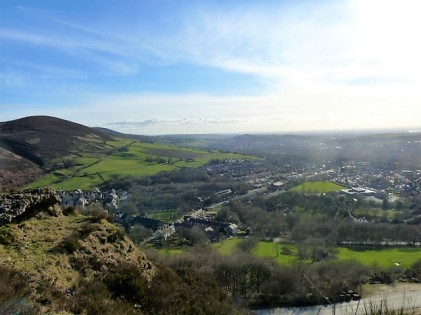 After poking around in the brush and taking in the amazing views, we started heading back towards the car. As we were descending the slope, a worker from the quarry honked and waved at us as he drove by. How pleasant. Then as we were closing in on the car, another worker stopped to say they were getting ready to close the gate. Oh! That’s what that meant…

We made our way back towards Manchester, this time with Fella at the wheel. We ended up stopping at a shopping center outside of the city that offered free parking. We only needed to kill another hour or so before heading back to the city, so we went for dinner at McDonald’s. Not our first choice by any means, but it was our only option.

Just a little comparison of an American vs. English McDonald’s:

Any who… we finished our meal and walked over to the grocery store to pick up some more milk chocolate Digestives (I had to get my fix) and stumbled into an ice cream shop on the way back to the car. I don’t recall the name of the place, but they had the best salted caramel ice cream ever!! Side note: this was my first experience of eating ice cream and drinking hot tea. I felt very English at that moment. 🙂

We made it back to the theater with plenty of time to spare. We took some pictures, bought some paraphernalia, and waited to be seated, all the while singing along to the Meatloaf music playing overhead.

The show was phenomenal! The story, the music (duh!), the actors/actresses, the talent, the scenes on stage, the props; everything was outstanding. I have been to a handful of live shows in my time, some of which have included live animals and larger than life props hanging from the rafters, but they all pale in comparison. Maybe it was the good company. Maybe it was the small venue making for a more intimate experience. Maybe it was just my love of Meatloaf. Maybe it was because earlier in the day, we were doubtful that we would be able to see the show. Whatever the reason, Fella and I had an absolute blast.

After the show, we floated out into the street, reeling from the performance. As we walked back to the car, arm in arm, we reminisced about our favorite parts of the show in between humming and singing. We made it to the car where our feelings of euphoria quickly came to an end when the GPS couldn’t locate where we were and we ended up circling Manchester, trying and failing at finding the motorway, yelling at each other in the process.

Once on the motorway (and heading in the right direction after a brief yet extremely confusing detour due to, surprise, surprise, another construction zone), we exchanged apologies for the heated conversation sparked by the ‘stupid phone’ and listened to some more Meatloaf.

By the time we reached York, it was pushing midnight, which, with the jet lag still prevalent, felt closer to 5am. I honestly should not have been driving. Well driving was fine, but parking…? As I drove down that ridiculous alley with cars lining either side looking for a space that was feasible, it happened: I clipped a mirror. In a daze, I muttered an expletive and kept on driving. As I proceeded to park in the only available spot (the farthest one from our cottage), I explained to Fella that my ‘accident’ wasn’t my fault as I hadn’t hit any other cars for the past 3 days on that street; that they had just parked too far inward.

I still stand by my justification.

We hit the hay as soon as we got in, and awoke the next morning ready to face our last day in England.

4 thoughts on “Meatloaf in Manchester”