Renata challenged me to write about a memorable birthday I’ve had (an echo from Bill) and since I’ve pretty much spilled those beans on my own quarantine birthday post a couple months back, I’ve decided instead to share my coolest birthday gift: a car.

Now with that lead up, you’d think it was an awesome birthday surprise that came with an over-sized bow or maybe the keys gifted in a little box that was perfectly wrapped. Yeah, none of that happened…

When I was a teenager, I got my driver’s license as soon as the law allowed me. I don’t recall if that was what I wanted or what my parents wanted since I was a high schooler with extracurriculars they were tired of driving me to and from. Either way I was provided this adorable 14 year old hatchback by my parents. It was nothing special, but it was my first car and I loved it.

a spitting image of my ’96 VW Golf, Heidi

Two days before my 18th birthday I was driving home from work when I saw flashing red and blue lights come on in my rear view. I was still at that age when I took road rules very seriously, so I knew I wasn’t speeding. I pulled over and watched the officer walk up to my car; I was mortified. He asked me if I knew why he had pulled me over and I answered honestly: “Sure don’t.” Turned out my tags were expired BY 6 MONTHS! I’m not sure if it’s the same from state to state, but where I live you have to renew your car’s registration with the DMV every 1-3 years and you keep stickers on your plates of when your registration is valid thru.

Now as a teenager and a post drivers ed student who was taught by a woman whose proudest personal achievement was getting sent to a nut house (no, I’m not joking–she had her certificate of program completion from a mental institution framed and hung in her classroom), it should really come as no surprise that I had no idea what registering a car meant. It had plates on it; I thought that was sufficient enough.

In order to “teach [me] a lesson” the officer said he would be writing me a citation (as if getting pulled over for the first time wouldn’t check that box). He asked for my license and registration and walked away. When he returned he told me that since I was not yet 18 I would be cited as a juvenile, so not only would I have to pay a court fee, but I would get points added to my license (for the ill-informed, points in this regard are not a good thing). Then he had the audacity to wish me a happy early birthday before sending me on my way. What an asshat!

When I got home I found my dad perched in his favorite spot in front of the television, threw my citation in his lap, and said, “You made me get a ticket!” At first he was confused, but when he read the reason, he started laughing and responded with, “I’m surprised it took this long for them to notice.” I’m sorry, what…?

He said that he knew my tags were expired and that he wasn’t going to be renewing them because the inspection was about to die (in my home state every vehicle needs to pass an annual safety inspection to determine if the vehicle is street legal). He said that my car had electrical issues that would prevent it from passing inspection, so essentially he was letting me drive it until I got caught with expired tags or it died on me. The award for father of the year goes to…

So that was it. I got pulled over for the first time just before I turned 18 and essentially my car is scraped. No worries though. Turned out my parents were planning on gifting me my dad’s car for my 18th birthday! This little snafu just made it happen 2 days sooner.

And that’s how I got a car for my 18th birthday, except there’s more to the story…

My dad’s car, the one I was inheriting was a dream car for any teenager; it was a 2-seater soft top convertible. The only problem was that it had a manual transmission. You know, the kind of car with an extra pedal…?

My birthday fell on a Friday that year, so you know what I spent my 18th birthday weekend doing? That’s right! Eating way too much birthday cake… And also learning how to drive a stick shift in probably one of the most unconventional ways. 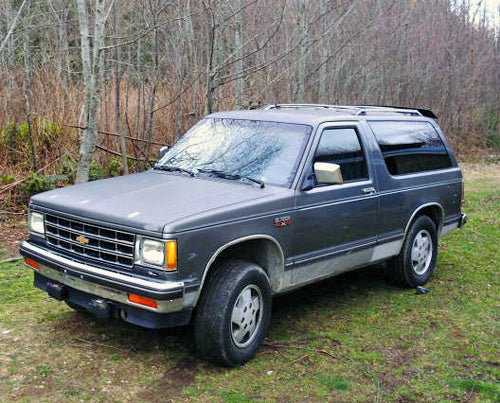 My first taste of driving a manual was in a cow field in my boyfriend’s ’86 Chevy Blazer. That hunk of metal was such a relic that it had a bench seat in the front that was immobile, which meant I couldn’t reach the pedals. We ended up rigging a booster seat with a folded up foam mattress topper and a duffel bag stuffed with blankets so I could drive it. Once I perfected the gas to clutch ratio in the Blazer, mom and I took my new whip to a nearby parking lot to practice starting and stopping on a hill; one of the most nerve-racking maneuvers you have to perform while driving a stick shift.

After these 2 practice rounds of me driving a manual, this happened…

That Sunday, mom and I met dad at a restaurant for dinner. As we were leaving the restaurant, dad handed me the keys to the Miata and said that I was driving home. I told him I wasn’t ready and he responded with, “Then I guess we’re not going home.”

Before I even turned the key in the ignition my limbs started shaking. I couldn’t get a good grasp on the shifter and my legs were so wobbly that I couldn’t press the clutch in all the way. I was terrified!

I really felt as though the universe caught on to my situation and ramped up the difficulty level because as soon as I was ready to put the car in first gear, the heavens opened up and started pouring down rain; the type of rain that prevents adequate visibility while driving. Super…

The first obstacle in my driving test was leaving the parking lot. Easier said than done since the first intersection forced me to stop and start on an incline. I made it to said intersection and stopped. I released the brake to give it some gas and the car started rolling backwards… towards another car waiting to turn. My dad freaked out, pulled the emergency break and screamed, “What the hell are you doing!?”

I responded in the same audible tone, “Trying to drive this damn car! Something I told you I wasn’t ready for!!” I took a deep breath, released the parking break, popped the clutch and floored it causing the tires to quite literally burn rubber. We squealed around the turn and just as fast as I exited the parking lot we came to a stop at a traffic light.

Dad’s only comment after that ordeal was: “Maybe a little less gas next time.”

After that hellish getaway and before reaching my parents’ driveway I ended up stalling twice and hydroplaning a handful of times which I found out is much easier to do in a car that only weighs 2,000lbs.

The following morning was my first time driving my new car solo and of course mom had to take an obligatory “first day driving new car” picture. I was pretty terrified but I got through it and have since perfected driving a standard transmission: probably one of the greatest ‘gifts’ I could have ever received for my birthday even if it was a) unsolicited and b) a bit on the unusual side of behind the wheel ‘training.’

12 thoughts on “Challenge of Aging”