What’s the worst type of physical pain you’ve ever felt? Was it a broken bone? Passing a kidney stone? Giving birth? A wax job gone awry? For me it has been any and all oral pain, but I’ve suffered many a strange affliction.

When I was a kid my brother and I were enrolled in an after-school daycare program. We’d take the bus from school in the afternoons and would be dropped off at a near by church that ran a private childcare center out of their basement. That sounds sketch as anything, but my brother and I loved our daycare family and since it was a private program, there were only about a half a dozen kids from each grade. Even with such a small enrollment, I was often targeted for bullying. Maybe it was my red hair or my small stature. No matter the case, often times I would be the victim of some type of abuse and my mom was called away from the office if the situation was severe enough.

One time a boy and I were in the reading corner together and out of nowhere he bit me. It was completely unprovoked; I swear. I was reading some first grade level chapter book when this kid just lunged at me while I was resting on a beanbag chair. The strangest part of the encounter is where he made contact: on my nipple (through my shirt of course). His mom and my mom were invited to the pastor’s office to meet and be briefed on what had happened. The next day I found out the boy had been expelled from the daycare.

A couple years later I had brought my extensive collection of Barbie dolls to school for show-and-tell. It was a “collection” themed show-and-tell and what better collection than my Barbies? I lugged my pink plastic suitcase with me from school to daycare and eventually out to the playground. A group of girls and I staked out a patch of grass on the hill by a birch tree and began playing with the dolls. Another little girl approached us and asked to play and we all agreed, but there weren’t any dolls left. Instead of asking for a doll from someone else or just watching our imaginations at work, the girl grabbed a fist full of my hair and ripped it out of my head resulting in a very bloody scalp. A teacher saw the whole thing happen and escorted the perpetrator and myself to the office where once again my mom was called out from work. I’m not sure what happened to the scalper, but I don’t recall ever seeing her again.

The next instance was a complete accident and I was the only one involved; well me and a sink…

I had just left a bathroom stall and rounded the corner to wash my hands when my feet slid out from under me (due to an excessive amount of water on the floor) and my face hit the sink, tooth first. The incident resulted in a chipped front tooth. Mom was called to assess the damage. I’m sure she was shocked that I wasn’t the victim of yet another bully attack this time, just of my own clumsiness. I didn’t have any pain associated with the tooth, so I stayed at daycare for the rest of the day and she returned to work.

A couple years after that I was playing on the monkey bars and somehow slipped through from the top, lodging my body between two bars. A friend got a teacher over to help me out of the predicament I found myself in and her solution was to grab my legs and pull down. This time I got a busted lip. It was such a hard impact I had to get surgery to correct the damage. The surgery itself was the worst pain I felt during my entire childhood. I don’t think the doc gave me enough Novocain before the procedure because I felt everything. I hear that being a redhead results in similar encounters.

A leap year after that I was out playing on the playground at daycare with a group of kids. One kid thought it was a good idea to start throwing rocks at the rest of us. He threw one my direction so I ducked…

… my face right into the wooden platform of a play structure. I hit the surface with such force that my tooth, the same one that had caught the sink years prior, was thrust straight up into my gum. I had to get braces for 2 years to pull the tooth back down. Once it was back in its original place and the braces removed, I had a cap put on to make it look like I had a normal, non chipped tooth.

Fella and I had been dating for about a year. We decided to take a camping trip one weekend to a nearby lake. It was a great weekend spent swimming, hiking, and relaxing. The final day, Fella made breakfast before we packed up to head home. As we were munching and making fun of a bickering couple a few sites down, I bit down on a piece of bacon and felt an odd sensation. Turns out my cap was no match for a slightly overcooked piece of bacon. I was mortified to show Fella what my front tooth looked like in it’s natural state, but not just that; I had a job interview the following day. I couldn’t go into an interview looking like Ellie from Up: 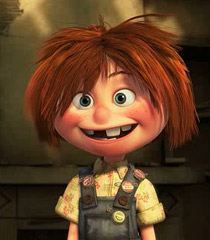 I was able to secure a dentist appointment a couple hours before my interview that same day to fix my tooth. It was an absolute miracle.

Things have been pretty uneventful on the oral front since then.